Thunbergia Laurifolia is a traditional herb in Thailand that has a variety potential benefits. 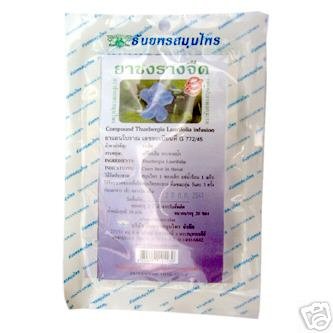 1. May Relieve Depression And Improve Cognition In mice that were given depression and memory problems (olfactory bulbectomy is a way to induce depression and Alzheimer’s Disease/Dementia pathologies in rodents), TL was able to restore short term memory and acetylcholine levels in the brain. R

2. Enhances Dopamine In The Brain

3. May Help With Stimulant Addictions

TL can mimic the effects of amphetamines and may help with addiction caused by amphetamines. R

It may also help with addiction of cocaine. R

4. May Help With Diabetes

It may also restore some activity of pancreatic beta-cells (insulin-secreting cells) and other important pancreatic enzymes. R R

TL may protect against the damage caused by:

TL may shorten the time it takes for burns to heal as well as lessen the amount of scab formation. R

7. May Help With Pain And Inflammation In mice exposed to carageenin, TL could protect against swelling-based pain. R

TL can also protect the blood from a parasitic Plasmodium Berghei infection. R

TL may protect the biliary system from developing cancer. R

10. May Protect Against Cancer

TL may protect DNA from mutating when exposed to compounds that create DNA damage. R

My Experience With Thunbergia Laurifolia

Still in progress as I gather more data.

Where To Get Thunbergia Laurifolia

TL may have synergistic effects with Saint John’s Wort. R

TL is technically non-toxic, even at high doses. R

Although, it may decrease blood pressure (which may be a good thing). R

TL may decrease blood sugar (which may be a good thing, unless you are hypoglycemic). R

It may interact with: R